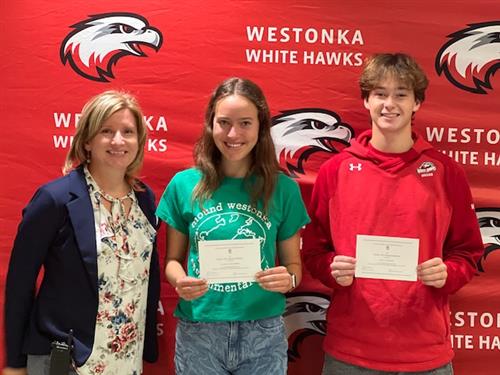 About 50,000 PSAT test takers are recognized each year by the National Merit Scholarship Corporation as "high scorers," and approximately two-thirds of the high scorers are recognized as Commended Students. Although Commended Students do not continue in the competition for National Merit Scholarships, some of these students do become candidates for special scholarships sponsored by corporations and businesses.

"We are proud to celebrate with Laura and Dylan as they receive this honor,” said MWHS Principal Jolene Herfel. “As commended scholars, their years of dedication in the classroom have prepared them to be successful. We are grateful for their representation in the National Merit Scholarship Program.”

Dylan Mather, son of Caralyn and Colin Mather, is involved in NHS, Link Crew and DECA at MWHS. He serves as captain of the White Hawks boys soccer team and also plays volleyball and tennis. Mather intends to pursue a degree in computer science next fall.

“Those being named Commended Students have demonstrated outstanding potential for academic success,” commented a spokesperson for the National Merit Scholarship Corporation. “These students represent a valuable national resource; recognizing their accomplishments, as well as the key role their schools play in their academic development, is vital to the advancement of educational excellence in our nation. We hope that this recognition will help broaden their educational opportunities and encourage them as they continue their pursuit of academic success.”