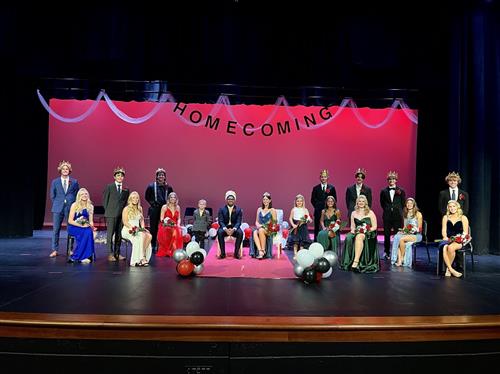 The coronation ceremony kicked off a full week of Homecoming activities. MWHS Principal Jolene Herfel introduced the emcees for the coronation, Student Senate members senior Laura Sunnarborg and junior Caryn Childers. The event included the traditional introductions of the senior members of the Royal Court, who were escorted by their parents. The event also included a video featuring the members of the Royal Court.

Sunnarborg and Childers opened the ceremony with the introduction of this year’s junior king and queen – Shirley Hills first graders Vivian Tronsgard, the daughter of Derek and Bobbie Jo Tronsgard, and Beckett Bode, son of Rick and Sherri Bode.

Queen Savanna Newell is proud to be a member of DECA and Student Senate, where she serves as a state coordinator. She is also a member of the tennis team. The person she admires most is her sister, Isabel, because she has a beautiful future ahead of her and has been with Savanna every step of the way. Newell’s favorite class is band with Gretchen Chilson. Savanna is the daughter of Ryan and Kelly Newell.

King Naresh Thakurdial is a five-year Student Senate member and a two-year member of NHS. He also manages the boys’ soccer team. Thakurdial greatly admires his mom as she is the most hardworking and resilient person he knows. His favorite class was earth science with Jim Kaeter because he always had a fun and interactive way of teaching. Naresh, who plans to study psychology at the U of M Twin Cities, is the son of Kishore and Indra Thakurdial.

Micah Boyce is captain of the track and field captain, an FCA board member, and a Link Crew leader. She is looking forward to going to the football games this year and having another great track season with her friends. Micah, who plans to study health science or kinesiology at a four-year university in the Midwest, is the daughter of Heidi Huber and Todd Boyce.

Dylan Mather is captain of the boys’ soccer team. He also plays tennis and is active in DECA. His favorite class was AP Calculus with Lisa Paul. Dylan, who plans to attend a four-year college to study computer science, is the son of Caralyn and Colin Mather.

Alicia Hatlestad, a three-sport athlete, plays basketball, lacrosse, and soccer, where she serves as captain. She admires her mom for teaching her that not everything comes easy and pushing her to be always the best version of herself. Her favorite class has been Amy DiGaudio’s ASL class because she makes it so entertaining. Alicia is the daughter of Felicia Hatlestad and Tracey Hatlestad.

Abby Hollenstein is a member of DECA and NHS. She is also captain of the girls’ basketball team and is looking forward to a successful senior season with her teammates. Abby, who plans to pursue a business degree at a four-year university, is the daughter of Cindy Hollenstein and Mike Hollenstein.

Ethan Garlock serves as captain in all three of his sports – cross country, lacrosse, and alpine skiing. His favorite class was AP Biology with Wendy Richards. He is looking forward to senior year sports and festivities. Ethan is the son of Jim Garlock and Anne and Mike Rogers.

Daniel Kaczanowski is the son of Pete and Cindy Kaczanowski. He is a member of Student Senate, Rotary and Link Crew. He most admires his brother for being a constant motivator. His favorite class was Intro to Engineering with Dale Kimball. Kaczanowski plans to study engineering or architecture at a four-year college.

Paige Ostrowski is involved in DECA, hockey and lacrosse. She most admires her dad for showing her how important it is to work hard at everything you do. Her favorite classes at MWHS have been her English classes with Corey Bulman. Paige is the daughter of Aline and Kurt Ostrowski.

Sam Dioszeghy is a three-sport athlete, competing in football, wrestling, and track. His favorite class has been ceramics with Jana Pare, because she is the best at teaching him different techniques. He is looking forward to all the senior activities this year and spending time with his team at the state wrestling tournament. Sam is the son of Cathi and Tom Dioszeghy.

Grace Ruud is involved in DECA, and she also plays soccer and lacrosse. The person she admires most is her mother, who inspires her with her kindness, constant love, and patience. She has enjoyed working on the school yearbook, because it is a great way to get creative and have a good time with your friends. She is looking forward to playing in her last seasons of sports this year. Grace, who plans to study business at North Carolina State University, is the daughter of Sabrina and Ron Ruud.

Matthew Uhas is a two-year golf captain, a three-year DECA officer, and co-president of Rotary. He is most looking forward to riding in the golf van with Andrew Atkinson and Pete Westby. His favorite class was accounting with Sue Simonson. Matthew, the son of Erin and Chris Uhas, hopes to study finance at a four-year institution.

Eve Seckinger is an NHS officer, participates in DECA, and is a member of the volleyball team. The person she admires most is her grandma, because of the constant dedication she has towards her own aspirations and the time she gives to her family. She is looking forward to the sports, dances, and everything possible for one last hoorah this year. Eve is the daughter of Kate and David Seckinger.

Max Buescher is involved with the alpine skiing team, the mountain biking team, where he serves as captain, and Link Crew. He admires his grandpa for his work ethic, determination, and commitment to everything he has done. His favorite class was AP Calculus with Lisa Paul. He is looking most forward to graduation and preparing for the fun and excitement of college. Max is the son of Sheri and Lee Buescher.

Nora Sipprell is a member of DECA and plays lacrosse and tennis. She most admires her older sister for being hardworking, but still fun. Her favorite class was ceramics. She is looking forward to spending time with her friends and classmates during her senior year. Nora, who is undecided about her college, is the daughter of Lisa and Kevin Sipprell.

Scotty Greenshields is captain of the lacrosse team, a member of DECA, and a Link Crew leader. He most admires his dad because he always puts others before himself and has always been a great inspiration. His favorite class at MWHS was American Sign Language. He is looking forward to all the sporting events this year, especially football. Scotty, who plans to study business at Montana State, is the son of Tom and Elise Greenshields.

Following the coronation, the Student Senate thanked family members and friends for their support. Congratulations to Queen Savanna and King Naresh, along with the rest of the members of the Royal Court, who will preside over the 2022 Homecoming activities.