Corey Bulman is Minnesota Teacher of the Year

May 8, 2017 — Westonka Schools is proud to announce that Corey Bulman, an English teacher at Mound Westonka High School, has been named the 2017 Minnesota Teacher of the Year.

Bulman is the 53rd recipient of the state's top teaching award and the first from the Westonka district. He has spent his entire 17-year teaching career at MWHS, helping to establish and elevate the Advanced Placement and Honors English curricula during his tenure.

"We are so proud of our teachers, and today we are thrilled for Corey Bulman," said Westonka Superintendent Kevin Borg at the May 7 awards banquet in Bloomington. "Westonka families are well aware of the powerful impact Corey has with our students and now all of Minnesota will know, too."

An independent selection committee representing Minnesota leaders in education, business and government selected Bulman for the prestigious award from an initial field of 132 candidates. Westonka was fortunate to have three candidates in addition to Bulman this year: Jean Ann Thayer, Lori Knauf and Cyndi Loewen. 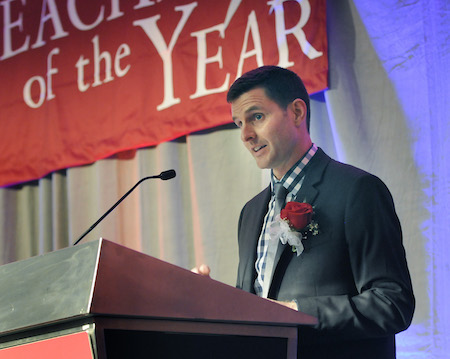 Photo by Janet Hotstetter, courtesy of Education Minnesota
Click the above image for more photos of Minnesota Teacher of the Year Corey Bulman

MWHS English and fine arts teacher Kate Schilling described Bulman as one of the greatest influences on her career as a young educator. "Watching Corey in the classroom is a master class in instruction," Schilling wrote in a recommendation letter. "He seamlessly blends historical context, hilarious anecdotes, subject expertise, and curated music to design engaging learning experiences."

"He creates curriculum with the sophistication and nuance that students normally only encounter in the college classroom, and his former students regularly return to share how well-prepared they are for university life and learning," Schilling added.

Bulman’s colleagues agree that what truly sets him apart is his passion for the interpersonal relationship and his humble devotion to shaping the lives of his students.

"When I was in high school, it mattered a great deal to me how adults treated me," wrote Sara Strother, a former student of Bulman’s who now teaches art at MWHS, in a recommendation letter. "Corey was an adult who showed me he believed I was smart and cared about my ideas. He was honest, funny and made me believe in myself."

"Corey doesn’t just care about the people in his classroom," Strother continued. “He cares about how to make them better people, thinkers and leaders of thoughtful lives.”

Perhaps Bulman’s greatest gift is his ability to create meaningful connections with students, especially during the trying and difficult moments they inevitably experience in their high school years. As Randklev described, each and every time students endure loss, Bulman "will cast aside lesson plans, test dates, writing assignment due dates, and his own personal plans to address, support, empathize, and guide students through those intensely emotional moments."

"That unconditional love and acceptance of our students and families takes tremendous courage, compassion and leadership," Randklev wrote. "I know of no teacher in my 36 years of teaching and administrative experience who does this critical work better than Corey Bulman."

In his acceptance speech Sunday afternoon, Bulman shared two thoughts on education: teaching is hard and teaching matters. He said:

[Teaching] matters because teaching students to embrace the possible is important. It matters because young people need adults in their lives that are going to cheer for them every single day, and you are those people. It matters because often you are the candle in the darkness that help kids find the light. And it matters because a smile and a greeting might mean the world to a young person who’s struggling with life that’s beyond our comprehension, and we won’t know, we’ll never know, but we do it anyway.

"I’m awe of the people I get to work with every day at Westonka Schools," Bulman said. "These people are maestros. They tease out greatness at 7:45 in the morning ... in Minnesota ... in January."

"I’m in awe of my students," Bulman continued. "They make me question, and they see the world as it should be, as it’s going to be, and they hold me accountable for that. And I thank every student that’s ever passed through my classroom."

The Minnesota Teacher of the Year Award means a whirlwind year for Bulman. He will visit the White House, attend the college football championship, attend a weeklong class at Harvard University, go to NASA Space Camp and give speaking engagements statewide. He will also be a candidate for National Teacher of the Year.

2017 Minnesota Teacher of the Year Banquet

May 7, 2017 - Video provided by Education Minnesota